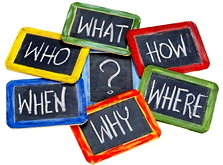 Here’s a challenge for you and a colleague. Get yourselves a large piece of paper (a sheet from a flipchart or a broadsheet newspaper is ideal) and place it on the floor. Now, the challenge is for you both to stand on the paper, but without being able to touch one another. Sounds impossible, but there is a simple solution (please see the bottom of the blog for the answer). When using it in workshops I have had all manner of imaginative, though incorrect, suggestions: ranging from turning back to back, tying each person’s hands together, putting each person in a bin bag, and a variety of contortionist options that would not look out of place in a game of Twister, but none of them come anywhere close. So why do most people not see the simple solution immediately (me included)?

It has been said that assumption is the mother of all cock ups. It may not be the mother, but it is certainly a close family member in many day to day challenges. The problem is that our brains are very adept at pattern-recognising and pattern-making. It is these mental models, rules of thumb, or heuristics that allow us to function effectively, allowing us to rapidly sift and sort information into useful knowledge, according to whether it confirms or contradicts the patterns already embedded in our minds. The danger is that we misread the signals and lock onto patterns that aren’t actually there.

In other words, we tend to see, hear and understand based upon what we already believe (what are mental models tell us to see, hear and understand) rather than what is actually there. It turns out that much of our understanding is based upon assumption not observation. One way to avoid self-limiting assumptions is to get a second opinion, but paired or group solutions can be equally incomplete unless a diversity of knowledge and experience is represented. Homogenous groups tend to exist in an echo chamber, producing ideas that are nothing more than updated versions of existing thinking, which still leave assumptions unquestioned.

The answer, for an individual or a group, is to stop, look, think and investigate assumptions by asking the right questions. As Sherlock Holmes advised Watson, “It is a capital mistake to theorize before you have all the evidence. It biases the judgment.”

To take a real life example, consider the observations of US General Stanley McChrystal, when he summarized the difficult process of adaptation the US military underwent in the years following the 2003 invasion of Iraq: When we first started, the question was, ‘Where is the enemy?’ That was the intelligence question. As we got smarter, we started to ask, ‘Who is the enemy?’ And we thought we were pretty clever. And then we realized that wasn’t the right question, and we asked, ‘What’s the enemy doing or trying to do?’ And it wasn’t until we got further along that we said, ‘Why are they the enemy?’

So, in the first place, try following the advice of Rudyard Kipling: keep six honest serving-men and use them to interrogate the problem and your assumptions…

I KEEP six honest serving-men
(They taught me all I knew);
Their names are What and Why and When
And How and Where and Who.

Second, try writing down the problem and your thinking. Put the problem at the top of the page and write down your thoughts on the topic. When you’ve filled as much of a page as you can, stop, go back and find the assumptions – what are you taking for granted? An assumption is anything you don’t have actual proof for, an interpretation you’ve made of someone else’s motivations, or something implied by something you wrote. Write your assumptions on a separate piece of paper and then examine them to see where they might lead. Writing things down forces us to think more deeply about them, it also tends to widen our perspective beyond first conclusions.

Finally, it’s back to Kipling. His poem continues…

I send them over land and sea,
I send them east and west;
But after they have worked for me,
I give them all a rest.

Take his advice and have a break. If you have the leisure to mull over a problem, or even better sleep on it, do so. It seems that brilliant flashes of insight have a unique aspect to them. They almost never occur when you are actually focused on solving a problem, but after an intense, prolonged struggle with the problem, followed by a break. A change of scene, time away doing something else, or after a nap. Rest frees the mind from control of the conscious mind, allowing the free association of memories and ideas, which lead, in ways that are not yet fully understood, to unexpected connections and combinations.

In the case of the challenge I set you at the start, the flash of insight is the unstated assumption is that you can’t move the paper. The answer is to place the paper under a door. You then stand on the paper on one side of the door and your colleague stands on the paper on the other side of the door. With the door shut, you will be unable to touch each other. I have also seen a large table manhandled into position between two people so that they couldn’t touch each other, but I think you will agree that the door is the simpler, less energetic and more satisfying solution.

Making the Most of Yourself
25th August 2015

The Power of a Good Question
24th February 2015