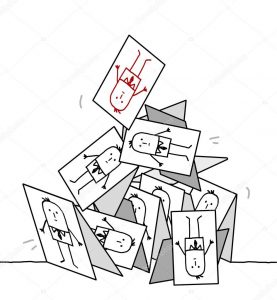 Two seemingly unrelated stories have struck me over the past month: the continuing saga of the Harvey Weinstein sex abuse scandal and the publication of the report into the Grenfell Fire commissioned by Muslim Aid. For me, the thread connecting them is the threat and the opportunity posed to hierarchies in an increasingly complex and networked world.

According to Margaret Heffernen, a leading analyst of the sexual abuse scandal, the power of hierarchy kept the lid on sexual harassment, through confidentiality agreements, firing people, or ruining their reputations if they spoke out. In her opinion, when the lid came off it marked a fascinating moment in organisational history: the moment “when hierarchies fail.” And the cause of this failure, she believes, was networks. #MeToo spread through networks. It didn’t need permission or approval, it grew very fast and it was beyond anyone’s control.

The public inquiry into the Grenfell Fire is yet to conclude, but the report commissioned by Muslim Aid appears to confirm what many said at the time: voluntary organisations had to fill the void left by a lack of official direction and weak leadership by the local council. But the report also recognised that, in certain respects, the voluntary sector “came up short, with some systems, structures and approaches not fit for purpose”.

Coordinated action does not happen without leadership. Direction, however gentle or subtle is always required. But in a networked world leaders will not hold all the levers of power and will increasingly be asked to lead without formal/positional authority, across internal and external organisational boundaries. In which case, where does authority as a leader come from?

In his recent book, The Square and the Tower, Niall Ferguson identified a similar historical narrative, in which major changes, dating back to the Age of Discovery and the Reformation, could be understood as disruptive challenges posed to established hierarchies by networks. He also challenged the confident assumption that there is something inherently benign in network disruption of hierarchical order. In his view, networks are more likely to lead to an anarchic dystopia rather a collective utopia, so some form of hierarchy/structure is required to control and direct them. The frightening thing for hierarchies, however, is that networks like seem impossible to control and are not going away.

The secret of our success as a species resides in our ‘distributed cognition’ the collective brains of our communities. Ferguson suggests that our species should be known as Homo dictyous (network man), because our brains seem to have been built for networks. Our early ancestors were collaborative foragers and all that has happened, beginning with the invention of written language, is that new technologies have continued to facilitate our innate, ancient urge to network.

In trying to understand the inspirational community response to the Grenfell Fire residents spoke of how tight-knit their community was and how many different nationalities lived in the tower. Some suggested that the response may have its roots in the preparation each year for the Notting Hill carnival. Whatever its origins the power of networks was certainly apparent, both the physical connectivity of friends and neighbours, and the power of social media, to mobilise action. What was missing was anyone to lead and coordinate the relief effort, in other words a network leader. While a great deal was achieved, in the absence of network leadership, much time, effort and resources was wasted and misdirected.

It is perhaps not surprising therefore, that for most of recorded history hierarchies have dominated networks. The word hierarchy derives from ancient Greek, meaning ‘rule of a high priest’ and was first used to describe the heavenly orders of angels. The attraction of hierarchical order was that it made the exercise of power more efficient, centralising control and eliminating, or at least reducing, the need for time-consuming arguments about what to do, which might also degenerate into conflict.

Hierarchy however, and the bureaucracy it inevitably generates, is unsuited to complexity. On the one hand, as the physicist Yaneer Bar-Yam has argued, a group of individuals whose collective behaviour is controlled by a single individual cannot behave in a more complex way than the individual who is exercising control. On the other hand, complexity and bureaucracy are diametrically opposed. The essence of complexity is its unpredictability, while the essence of bureaucracy is its quest for calculability and safety, which too often means it becomes a prisoner of events that were not predicted.

So, if complexity is beyond the wit of a single individual and bureaucracy is procedurally unsuited, a new approach to leadership is required: one that mirrors the interactions and mechanisms of the network and derives its authority from something other than hierarchical position. Perhaps the true test of leadership, dating back to our early ancestors, is not how grand your title, but how far people are prepared to trust you, to be open and honest with you, and to challenge you.

Left to their own devices networks develop naturally through our search for knowledge and belonging. So network leadership begins by helping people make sense of their situation and clarify their goals. Clarification starts when someone steps forward and makes suggestions about how to fix or achieve something. Naturally, again, we tend to associate with and listen to people we trust, those who have earned our respect through their integrity, generosity and reciprocity. And let’s face it, leaders are going to have to be more trustworthy whether they like it or not, because networks (#MeToo) force greater transparency and openness.

Openness is also key for the process of clarification, because it depends on continually refining what our goals mean in practice through facilitated discussion and working through disagreements. Leaders must recognize and embrace the “obligation to dissent”, encouraging those around them to speak their minds, to bring attention to hypocrisy and misbehaviour, but also to poor ideas and plans.

Humility and integrity are a powerful combination in a networked world. Life is not always a competition and perhaps we should all care more for getting the job done than who gets the credit. Ultimately, in a world without hierarchy anyone can acquire the authority to be a leader.