Lessons from the Valley of Death 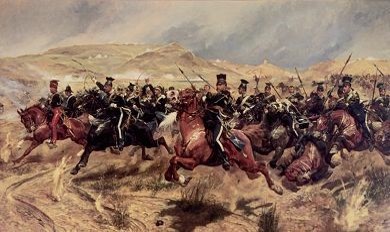 The 25th of October will be the 164th anniversary of one of the most famous (infamous?) events in British military history: the Charge of the Light Brigade. It took place during the Battle of Balaclava and is worth pausing to reflect on because it offers many pertinent lessons for leaders and managers today, most notably how not to communicate.

The Charge caused the deaths and wounding of 247 out of 673 officers and men (335 horses also died), and was the result of faulty communication between four men: Lord Raglan, Lord Lucan, Lord Cardigan and Captain Nolan. It had everything: ambiguous messages, faulty presentation, unstated assumptions, incompatible viewpoints, personal animosity, lack of appropriate channels and cumulative distortion or ‘Chinese Whispers’. To understand it we must look at both the characters and the events as they unfolded.

Lord Raglan was the Commander in Chief. He was 66 and had been Lieutenant Colonel of the 1st Foot Guards at 23 and a Major General at 39, but he had never commanded troops in action. He had last seen action at Waterloo in 1815 as aide-de-camp (ADC), or personal assistant, to Wellington, where a bullet shattered his elbow. He was seen as a talented administrator and diplomat, and was considered charming, gentle and dignified.

Lord Lucan was Commander of the Cavalry, which included the Light and Heavy Brigades. He was 54 and had undertaken no military duties for 17 years. He had paid for his command of the 17th Lancers, as was customary at the time, and was regarded as a perfectionist: very fond of parades, drills and inspections. He was indifferent to hardship and danger, but he could be bad-tempered, vindictive, and arrogant, and was consequently unpopular. He was ex-brother-in-law to Lord Cardigan, who hated him.

Lord Cardigan was Commander of the Light Brigade. He was 57 and had seen thirty years’ service, but never heard a shot fired in anger. He had bought command of two regiments. He was held in contempt by press and public for his harsh discipline as commanding officer of the 15th Hussars, for which he had been dismissed. Two years later bought command of 11th Hussars. He was keen on incessant drilling and harsh discipline. He hated Lord Lucan, who had jilted his sister.

Captain Nolan was ADC to Brigadier Airey, Raglan’s Chief of Staff. He was 36. An accomplished cavalry officer, who studied military history and had written a number of books on cavalry warfare. His report of 1838 said he had ‘great zeal and application’. He was critical of his superiors and was regarded in turn as an arrogant upstart.

The Course of Events

The rear of the Allied Army, which was besieging Sevastopol, was secured by a number of Turkish-manned redoubts on line of hills referred to as the Causeway Heights. On 25th October a force of 25,000 Russians, advancing from the east, took the redoubts and sent a force toward Balaclava to capture it. They were checked by the famous ‘Thin Red Line’ of the 93rd Highlanders and repulsed by the charge of Scarlett’s Heavy Brigade. However, the Light Brigade failed to follow up the Heavy Brigade’s success and were then intended to prevent the Russians from taking the Allied guns from the redoubts.

To this end, Lord Raglan issued written orders the exact meaning of which are still a matter of debate:

‘Cavalry to advance and take advantage of any opportunity to recover the Heights.  They will be supported by the infantry which have been ordered to advance on two fronts.’

However, Lord Lucan did not move the cavalry, because he believed he was to wait for the infantry. During this time Lord Raglan became increasingly impatient and finally sent another written order, when it appeared that the Russians were taking the Allied guns from the redoubts. This order was dictated to Brigadier Airey, who scribbled it down, without question, on a scrap of paper.  It read:

‘Lord Raglan wishes the cavalry to advance rapidly to the front – follow the enemy and try to prevent the enemy carrying away the guns.  Troop Horse Artillery may accompany.  French cavalry is on your left.  Immediate Airey.’

The message was passed to Airey’s ADC Captain Nolan.  As he departed Raglan apparently called after him:

“Tell Lord Lucan the cavalry is to attack immediately.”

Lord Lucan received the orders with some consternation and replied to Nolan’s impertinent impatience:

“Attack, sir! Attack what? What guns, sir? Where and what to do?”

Nolan was then said to have flung out his arm in a gesture of rage rather than indication:

“There, my Lord! There is your enemy! There are your guns!”

Nolan then rode off asking permission of the 17th Lancers if he could join them in the attack, for which permission was granted.

Lord Lucan was still uncertain what he should do. He was down in the valley bottom and therefore did not have as good a view as Lord Raglan, who was on higher ground. Nor had he made any attempt to scout the adjacent high ground, which included the Causeway Heights. He could not see any redoubts or see any guns being carried away. The only guns in sight were at the far end of the valley in which he sat. Nevertheless Lord Lucan conveyed his interpretation of the orders to Lord Cardigan, who replied:

“Certainly, Sir, but allow me to point out to you that the Russians have a battery in the valley in our front, and batteries and riflemen on each flank.”

The point acknowledged, but orders having been received, the Light Brigade set off. Lord Raglan and his staff expected them to incline to their right toward the Causeway Heights. The Russians also expected this and withdrew from all but one of the redoubts, forming up in squares near the crest of the ridge (the regulation response when infantry are faced by cavalry, though not observed earlier in the day by the 93rd Highlanders, but that’s another story).

To everyone’s surprise Captain Nolan then rode in front of the Brigade.  Either he was trying to warn Lord Cardigan that he was going the wrong way, or excitement had got the better of him, we will never know. He could not be heard over the noise of the guns and a splinter from the first Russian shell punctured his heart. As for the Light Brigade; well some reached the Russian guns but then all they could do was turn around and ride back.

In the aftermath, Lord Raglan was criticised, but died of dysentery the following year. Lord Lucan was sacked for failing to query Raglan’s orders and for misinterpreting them. Lord Cardigan was the hero of the hour and his woollen jacket was copied and still sells to this day (as does the balaclava). Captain Nolan, youngest, poorest and deadest on the day was perhaps unsurprisingly the scapegoat. I will leave it for you to decide who blundered and the reasons why?

‘Forward the Light Brigade!’
Was there a man dismay’d?
Not tho’ the soldier knew
Someone had blunder’d:
Theirs not to make reply,
theirs not to reason why,
theirs but to do or die:
Into the valley of Death
Rode the six hundred.