Try a Short Quiz and Learn How to Be More Creative This Christmas! 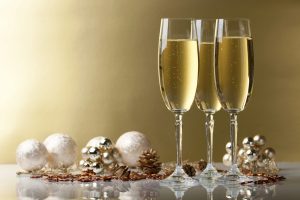 Below is a short Remote Associates Test, or RAT, which is used to measure a person’s ability to see relationships between seemingly remote ideas and is an important part of the creative thinking process. For each set of three words, find a word that is related to all three. For example, if the words were Rock – Times – Cheese, the answer would be Hard. Have a go and see how you get on.

If you are struggling, try an alcoholic drink. That’s not a hint or a clue, it’s a suggestion, because researchers at Mississippi State University in the United States have evidence to suggest that having a drink makes you more creative and better able to answer problems like these.

Stories of alcohol induced creativity are not unusual. A number of writers, artists and composers have related how drink helped their creative powers. In 1978, for example, English author Douglas Adams developed a radio comedy series entitled The Hitchhiker’s Guide to the Galaxy. It went on to be a huge franchise, including a five-book series which sold over 15 million copies. According to Adams, he got the idea seven years earlier while traveling through Europe. One night in Innsbruck, Austria, he got drunk and wandered into a field. Lying down he gazed at the star-filled sky while clutching a hitchhiker’s guide to Europe, and thought that someone should write one for the whole galaxy. He then fell asleep almost forgetting his drunken revelation.

It was to investigate this phenomena that researchers at Mississippi State University (MSU) ran an experiment. They served vodka-cranberry cocktails to twenty male subjects until their blood alcohol neared US legal intoxication levels (a blood alcohol concentration, or BAC of .08 or above). They then gave them, and a sober control group, fifteen RAT questions, like the ones at the start of this article. Although only a small study, their findings confirmed that drunk people are better at creative problem solving. Not only did the tipsy subjects solve 13% to 20% more problems than the sober subjects did, but they also reported more “Aha!” moments (flashes of insight) than their sober counterparts, and arrived at solutions more quickly.

The latter, in particular, contradicts earlier studies (and personal experience) showing that drinking slows thinking. The MSU researchers conjecture that although drinking does slow down thinking speed it also leads to a loss of focus, which is a distinct benefit when trying to solve problems of this type and make creative connections. In an exercise like the RAT, it’s important not to fixate on one word and alcohol seems to help the brain do this by drawing on a wider range of data and letting seemingly irrelevant stuff creep in. In other words, instead of doing a very focused, goal-directed search for the answer, those under the influence of alcohol engage in what neuroscientists call “spreading activation,” subconsciously activating all the recesses of their brains for the right word associations, rather than focusing narrowly and methodically on one word at a time.

This sounds feasible, but more striking still it highlights three of the four stages of the creative process: preparation, incubation and illumination. Preparation is immersion in the problem, often taking many years, but it also involves engaging with crazy ideas. Creative people tend to be high on impulsivity and low on restraint, just like those who have had a drink or two. Incubation is when we deliberately put the problem aside and allow inchoate imaginings and associations to interweave beneath our consciousness, where they will hopefully generate new and interesting relationships (i.e. spreading activation). This is at the root of advice to forget about the problem and go and do something different, which then leads to that moment of illumination when the solution bursts into our minds with startling clarity. The so called “Aha!” moment.

So, if you need to think creatively an alcoholic drink might be helpful (a perfect excuse – if you needed one), but beware of having too much. Blood alcohol levels much beyond .08 can leave us, like Douglas Adams, struggling to remember our brilliant idea and restrict our ability to screen out a terrible idea. It is worth remembering the old adage to “Write drunk, but edit sober”, which fittingly brings us to the fourth and final stage of the creative process, that of verification or execution, which requires deliberate and sober application, not your latest off-key rendition of “I did it my way”.

The answers to the RAT test, by the way, are: Match, Bowl and Sick.